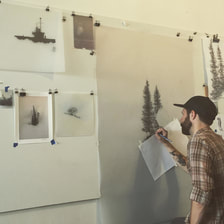 My work often focuses on natural and unnatural landscapes, disconnected from their usual surroundings or places in time. I want to evoke feelings of desolation through these terrains. Ancient trees, decaying flora, and icy mountains obscure long forgotten places and objects, at once familiar and unrecognizable, creating a space for rumination that challenges the relationship to their meaning. I am suggesting something more with moments of chaos, namely that these are personal stories, real life, witnessed in my past or present life experiences. Hidden within the trees and brush one will find oil rigs, fire pits, pills, rainbows, logos, planes, and other various curios which make the piece personal and create a greater narrative when pieced together. Using a self-created process involving materials such as graphite, india ink, colored pencil, pen, acrylic, tape, spray paint, collage and mylar layered in resin, give an even further feeling of land’s depth.
C.V.
Brooks Shane Salzwedel received his B.F.A. from the Art Center College of Design, Pasadena in 2004. Salzwedel graduated with honors while working on his first solo show with NewSpace Gallery, Los Angeles. His unique process is published in the book, Read This if You Want to be Great at Drawing along with iconic artists including Ed Ruscha and Paul Noble. In 2015 Salzwedel was accepted into Denali National Park’s visual Artist-in-Residence program and two years later in Aspen, White River National Forest, Summer 2017. His work has been commissioned by popular UK singer Novo Amor and the Guthrie Theater amongst many other organizations. Salzwedel has given talks about his work and career from institutions including Gonzaga University in Spokane, WA to the Museum of Art and History in Lancaster, CA. His work has been displayed at renowned museums worldwide including a solo show at MOAH, Lancaster Museum of Art and History, CA (2018) and group shows at Honolulu Museum of Art, HI (2017), Hammer Museum, Los Angeles (2010), MOCA, Los Angeles (2010), and San Diego Museum of Contemporary Art, San Diego, CA (2009). Brooks currently works out of his home studio in Los Angeles, CA.